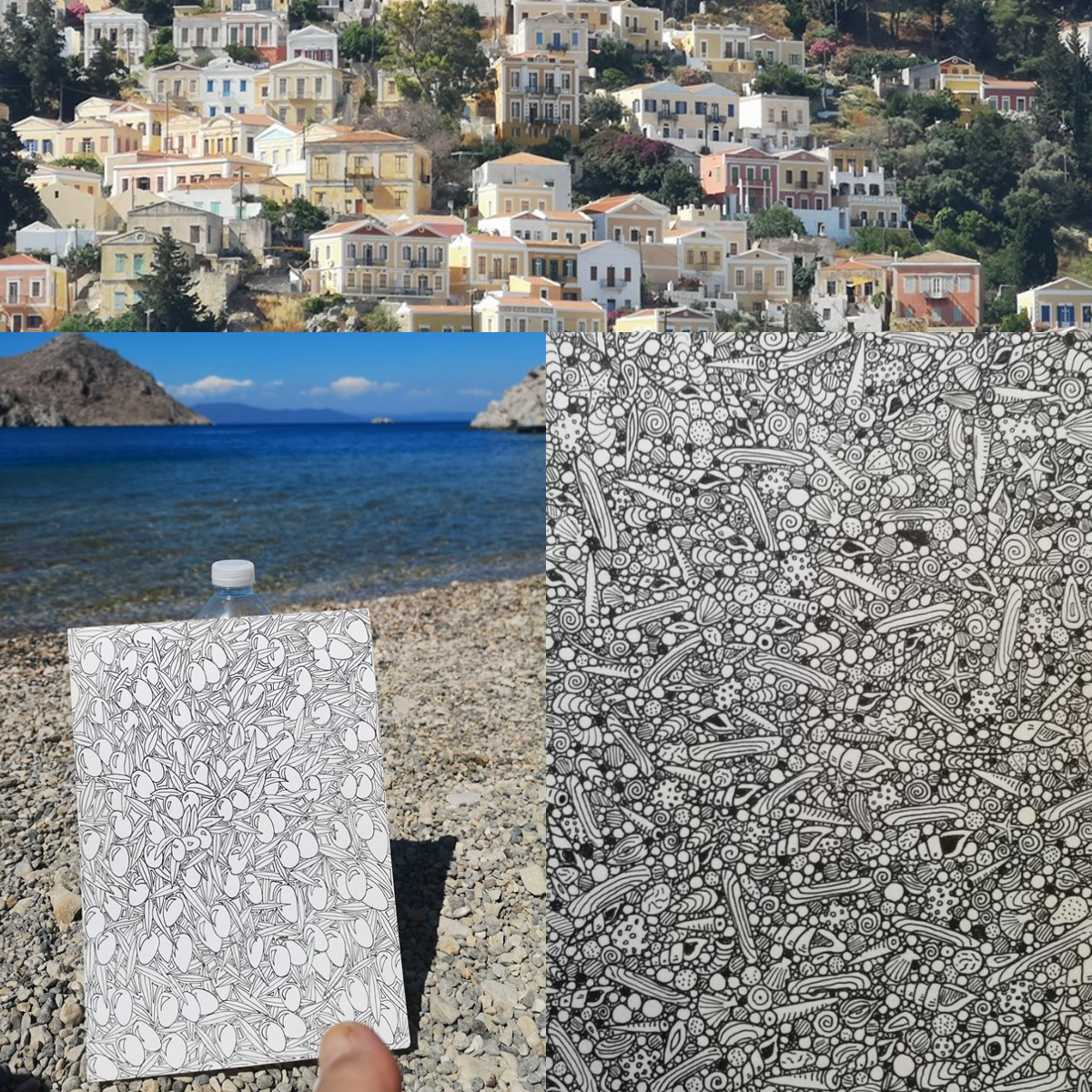 After this week of record temperatures during which I’ve mostly been standing around on hot asphalt – where it was 52°C – wearing a plastic hat, man made trousers, reflective jacket and gloves, I found myself thinking back to May this year when I was on holiday with my wife on the beautiful Greek island of Symi.

Symi is about two hours by boat from Rhodes. You arrive at Gialos harbour which is surrounded on all sides by pastel-coloured neoclassical Italian-style houses. The island used to be known for sponge diving and building wooden ships but now the main source of income is tourism.  You can find out more about Symi on the Visit Greece website http://www.visitgreece.gr/en/greek_islands/symi_more_than_words_can_say

I guess we’ve been to Symi about six times.

We love it there because it is so peaceful, the food is delicious and the people are very friendly. It can get a bit busy in the day with island hopping tourists dropping in, so we usually take Captain Yanis’s taxi boat to one of the more isolated beaches and tavernas. In the evenings, it’s really nice just to chill with a drink or two, down by the harbour and watch the people coming and going as the sun goes down.

And of course there is plenty of time to sit on the beach and draw.

We went to Symi in May this year and after all the excitement of the Liberty London fabric design competition https://www.libertylondon.com/uk/search?q=small+town, I was moving away a bit from drawing ‘Small Towns’ and trying a few new designs featuring flowers, fruit and veg.

Symi has has plenty of the above – wild oregano, thyme and dill, olive groves, figs, juniper, citrus trees, pomegranates and a host of plants such as jasmine and hibiscus, that are a lot more difficult to find in the Gravesend Riverarea.  And once I’d run out of new ideas in the flora department, well I drew the beach!

I only took pen and paper with me: no colours. So, lately, when I’ve got a while, I’ve been finishing them off. Not all of them have been coloured in yet and not all of them are in my Gallery yet, but I’ll be adding them as soon as they are finished and when Roger has photographed them for me. I have had some of them photographed in black and white for a possible colouring book project I’ve got im mind. Otherwise, the photos in this blog are mainly just from my phone.

There are small olive groves dotted about the landscape on Symi. The olives ripen in late October or early November. Because Symi is so dry, few people have water to irrigate their olives. Symi used to import all its water by boat from neighbouring Rhodes – it still imports some in busy periods. But now a new desalination plant means that the island is more self-sufficient in water and there is a new by-product – Symi sea salt!

Pomegranates are grow on the island. Pomegranate trees like olive, fig and citrus trees are usually grown by families in small gardens for their own use. They then pool olives to produce olive oil. Here is a photograph of a baby pomegranate and a picture I drew. I’ve sold the original drawing but prints are available here https://duncangrantartist.com/product/fruit-series-pomegranates-print/

And gin in its natural (and more usual) habitat……

All the food on Symi is influenced by what is available locally seafood, goat, lamb, lemons, tyme, coriander, juniper and so on.  We love the Symi shrimp – one of the specialites of the island …oh and lemon potatoes…. stuffed vegetables…!

I’m toying with the idea of running a one week art workshop on Symi if there is enough interest. There is a really good venue Villa Poseidon in Yialos on Symi (pictures below). It has a large downstairs workshop/gallery space and two double bedrooms upstairs. The owner also has other accomodation available nearby. If you are interested in taking part in a workshop, drop me a line via the contacts tab on this site. 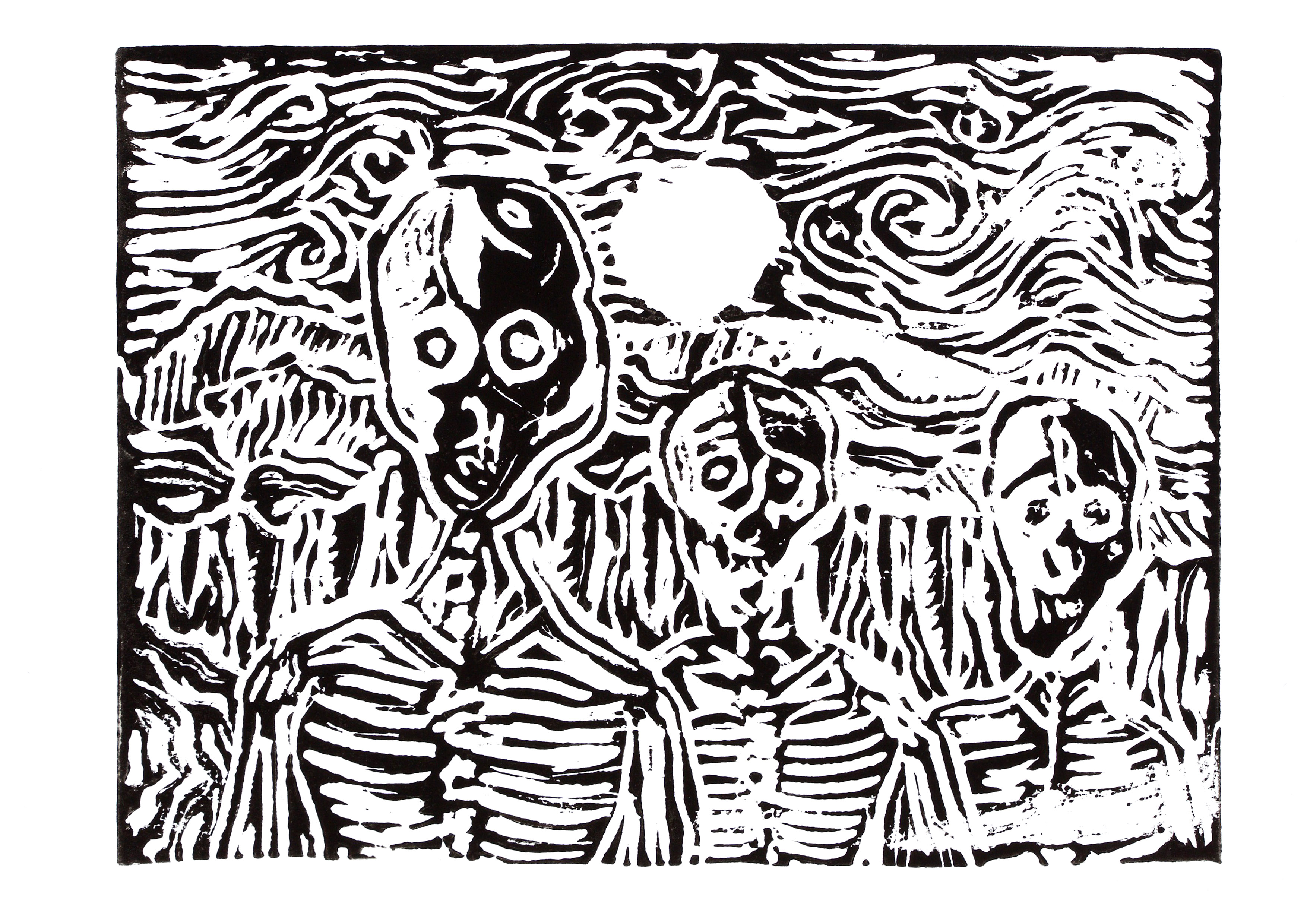