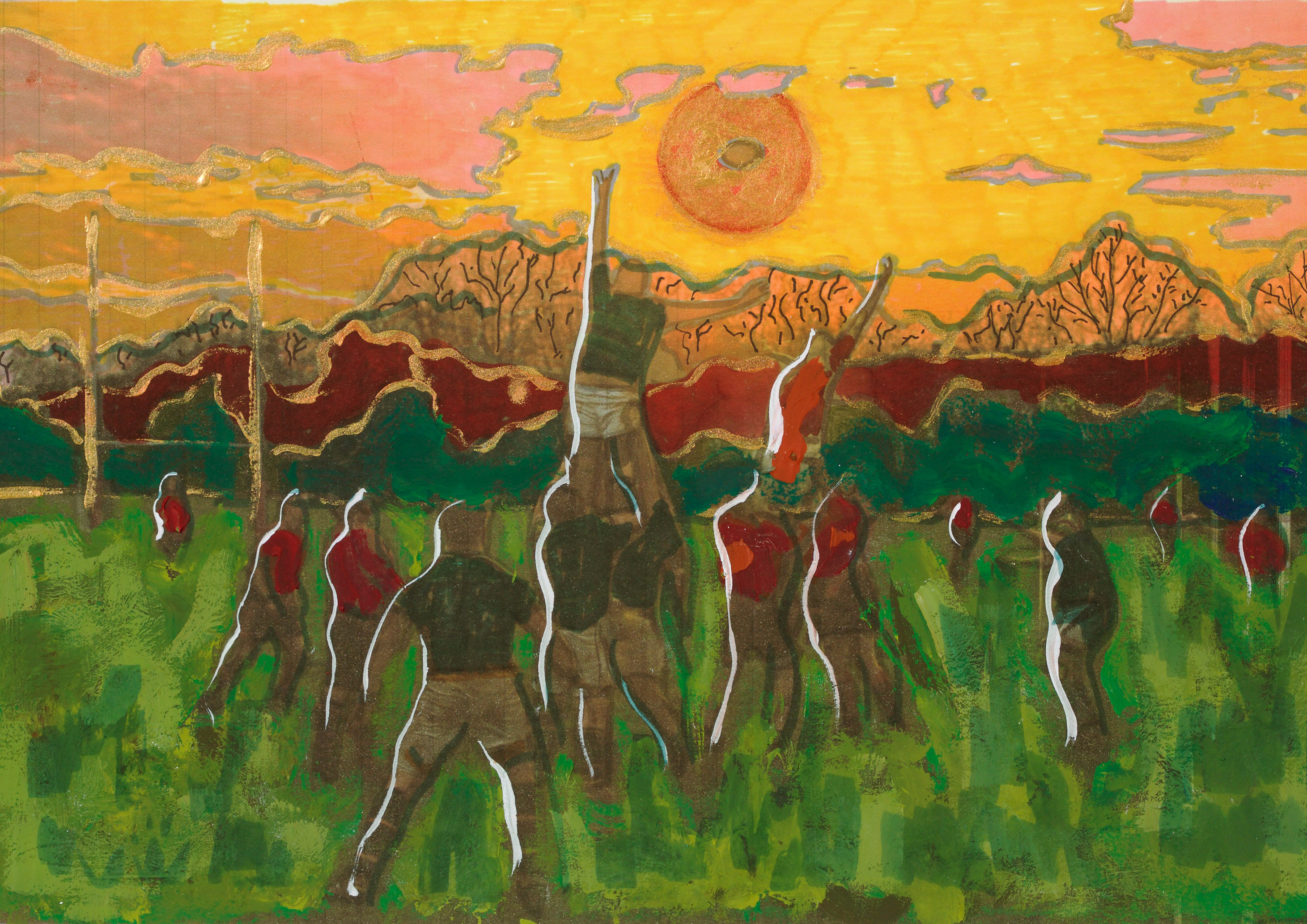 When I was a lad, before I went to college, and again during the 80s, I used to play rugby for Vigo RFC https://www.pitchero.com/clubs/vigorfc. I started out playing on the wing and then moved forward as I got older and slower.

Well, this year marks the Club’s 50th anniversary and to celebrate that they’ve brought out a limited edition book, charting the history of the club, edited by Trevor Newnham. I was delighted to be asked if I’d do some artwork for the book, based on old photographs. You can see one drawing on the cover, and three others inside.

The club, originally based at the Vigo Inn, near Fairseat in Kent, on the top of the North Downs, has an interesting history. This brief account is based on information from the 50th anniversary book and from Trevor’s article for the Stansted and Fairseat History Society https://stanstedhistory.org/groups-vigo-rfc/ Both contain some fascinating old images.

Rugby wasn’t always the game of choice at The Vigo Inn, formerly called The Upper Drover. Once upon a time, punters used to play ‘daddlums’ a form of table skittles. But everything changed one Sunday lunchtime in 1968 when a group of well-oiled local rugby players – regulars at the pub – came up with the idea that the field at the back of the pub would make a pretty good rugby pitch, and as such would offer ‘an ideal opportunity to combine beer and fitness’. Despite the field in question being ‘none too flat’ and more than somewhat muddy, their beer fuelled vision gradually turned into a plan. There were meetings, a committee and, in 1969, with telegraph poles as goalposts and a disused chicken shed to change in, Vigo RFC was founded. Lillian Ashwell, the pub’s landlady was elected as President – probably the first woman President of a rugby club in England.

A couple of players from nearby Gravesend RFC were persuaded to provide some coaching – a necessary first step as many of the prospective players had never touched a rugby ball before. But the team was enthusiastic and willing to learn and most players were soon judged to have ‘mastered basic rugby techniques’ and despite being ‘a little raw in one or two specialist positions, such as hooker’ were ready for fixtures with B teams from other clubs. In their first serious match, away to Deal in 1969, Vigo RFC recorded a ‘resounding’ 3-1 victory.

As the rugby became more serious, the club moved several times. Ten years on, it settled in current home at Swanswood in Harvel, not far fromthe original Vigo Inn.  A club member who was also a builder, supervised the construction of a clubhouse, with the players acting as labourers. And, over the years, through a number of fundraising initiatives, the clubhouse was improved and floodlights were installed.

Since then, the club has gone from strength to strength. It now fields four adult teams, a juniors team, and two junior mini-rugby teams.

As Trevor Newnham writes:
‘From the grassiest (and muddiest) of grassroots, the Club – Vigo RFC – came into being.  A pub side at heart, a determination to be independent of any brewer, professionalism, and a club that would offer a warm home to anyone who loves this great game.’

The originals of my drawings for the book and digital prints are available on my website. Just follow the links below: