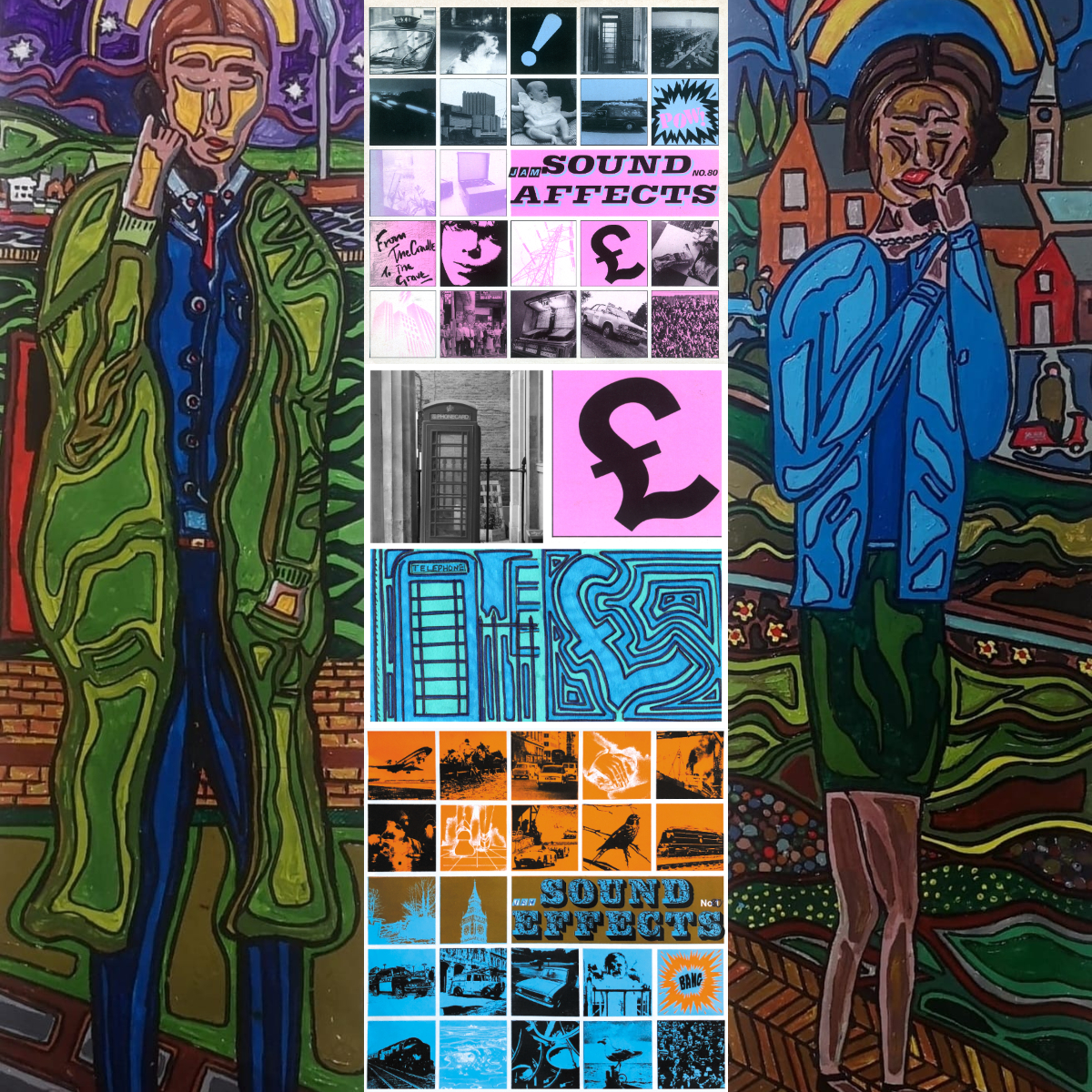 It seems like ages ago when I was commissioned by  Gravesham Borough Council to create an installation in a telephone box, as a tribute to The Jam’s 1980 studio album, Sound Affects, as part of  the Winter Light Festival 2020.  But as with most things lately, COVID got in the way and the event  was cancelled. I got paid and I kind of forgot about it.

But now it’s back again!  And my installation will be one stop on a circular trail of light around the ‘Heritage Quarter’ and along the river.

Sound Affects
I’m not sure quite how well known it is , that the telephone box outside Gravesend Old Town Hall was featured on the Sound Affects album cover.

The original photo was taken by art director, Bill Smith, who worked with The Jam over the three most important years of their career. During that time he designed five album covers and 16 singles bags for the band, as well as a range of promotional ads, posters and videos.

‘The idea came from Paul [Weller] who was working in the studio at the time making the album, and they used some effects from the series of BBC Sound Effects records,’ Bill explains. ‘Paul gave me a sleeve with the BBC scrubbed out and replaced with JAM and the number altered to 80 (to reference 1980, the year Sound Affects was recorded) and “Effects” changed to “Affects”. He asked me to recreate the cover, using images that related to the songs on the album.’

Bill was brought up in Gravesend but, by 1980, had moved away.  It was while he was visiting his mother-in-law in Gravesend to photograph her dog for the Sound Affects cover that he took the picture of the phone box.

‘I just chose subjects around my home – the jukebox, record player and even my sister’s friends baby,’ Martyn says. ‘Then I walked around the streets of Camden Town and the West End of London shooting interesting subjects, such as the funeral hearse in York way and  a taxi at Kings Cross Station. The power station at Dungeness was mine, plus the police car and the Brunswick Centre.’

Martyn has since met one of the funeral staff. a young undertaker who was in the hearse that he shot for the cover. Thirty-odd years later he was running the firm and Martyn was able to provide him with a print of the photo.

The “baby”, by then aged 36, also turned up at  the About the Young Idea exhibition at Somerset House, in 2015, where she met Paul Weller.

The Sound Affects album was released on 28th November 1980  It sold over 100,000 copies and spent 19 weeks in the UK album charts. making it to number 2. The track Start!  was a number one single for the band. And although That’s Entertainment was never released as a domestic single,  it did chart as an import single, making it to number 21.

Sound Affects was the last album cover Bill and Martyn ever did for The Jam.

‘We created the sleeve and inner bag and I designed a series of ads and posters that used Roy Lichtenstein pop art influences for these,’ Bill remembers. After that there were three or four more covers for singles that I did, including 1981’s Funeral Pyre , for which I also wrote and directed a promotional video. And finally, Absolute Beginners. I also wrote and shot a video for that with Gered Mankowitz  but the band weren’t happy with our initial edit and, rather than let us do a re-edit, we were sacked and they did a brand new video shoot. It was the last time I spoke to Paul Weller until the 2015 Jam exhibition at Somerset House.’

Red telephone boxes
The first public telephone boxes were introduced by the Post Office in 1921. They were made of concrete  and some local authorities, including the London Metropolitan Boroughs, refused permission for them to be installed. Eastbourne Corporation stipulated that the kiosks could only be installed if they had thatched roofs!

In 1924, Sir Giles Gilbert Scott won a competition to design a telephone kiosk  that would be acceptable  to the London boroughs. You might have heard of Scott. He designed Our Lady of Assumption Catholic Church in Northfleet…oh yeah, and Liverpool Cathedral, Battersea Power Station  and the Bankside power station (now the Tate Modern). Scott’s  winning design featured steel structure with a silver exterior and a greeny-blue interior. The Post Office, however, decided to make it in cast iron and to paint it red. Kiosk Number 2 (K2). The boroughs were won over and K2 was installed in and around London.

After three more iterations, the Post Office commissioned a new ‘Jubilee kiosk’ to commemorate the  silver jubilee of George V. The  K6, as it is known, again designed by Scott, went into production in 1936. It was a bit more streamlined than the K2, designed to be cheaper to produce and to take up less pavement space. The number of glazed panels were increased from 18 to 24.

Thousands  of K6 boxes were made and installed all over the country, replacing most of the existing  telephone boxes, as well as introducing them in thousands of new sites. The telephone box by Gravesend Old Town Hall – the one on the Sound Affects cover – is a K6.

Although there was some objection early on to the bright red paint used on the boxes, the K6 box quickly became a national icon. In 1980, British Telecom’s plan to paint all telephone boxes in their corporate yellow caused a national outcry. Battered into submission by the Daily Mail. BT backed down.

By 1985, BT announced that the old red telephone boxes would be replaced because they no longer met the needs of customers and were expensive to maintain and clean. Once again their was a vociferous campaign to stop this but, this time, BT held firm.

In the late 80s, just before deregulation of telecoms, I worked for BT for a bit, identifying  new sites for payphones around the country for BT to develop, before they were nabbed by their main competitor, Mercury Communications.

With the old red boxes being replaced by more utilitarian versions, many local authorities used legislation designed to protect buildings of architectural or historic importance to keep  their red telephone boxes. Around 2,000 red boxes were given listed status. Lots more were sold off.  But more than 6,000 were bought by organisations and converted for community use, as libraries or to house public defibrillators. The only use forbidden by the regulations was ‘telephony’.

In 2021, BT announced that about 5,000 public phone boxes around the UK would be protected from closure in areas with  high accident or suicide rates or poor mobile signals.

The Gravesend mod revival scene in 80’s Gravesend
In the 1980 when Sound Affects I was released, I was working just around the corner as a Saturday (and holidays) boy, alongside my mum,  in Boots.  I was 15.  At around the same time, my now wife,  Davina, and her mates were part of the mod revival – hanging round the town centre showing off the look and dancing  the night away at mod clubs. Davina’s friend Kay Sugg even had a scooter.

The Jam, with their mod styling  and energetic, punky post-60s mod sound was the soundtrack to their lives. And with no mobile phones then, telephone boxes were essential for keeping in touch.

Davina and her friends still have really good memories of those times.

‘I wasn’t a fully fledged mod when Sound Affects came out but Quadrophenia had been out the previous year, so the revival was in full swing,’ Davina reminisces. ‘The album reminds me of just turning 17, dancing at every opportunity and a continual round of parties with my school friends. My favourite track was and still is Start!‘

‘Sound Affects is as good today as it was 40 years ago,’ says former teenage mod, Yvonne Lynn.  ‘Listening to the album back when I was a 16-year old mod living in Gravesend consolidated my feelings of belonging in the mod scene. The lyrics and music made sense to my teenage rebellious self and it was the glue that held our group together.’

‘The album tied in with so much,’ agrees Derek Forbes. ‘Mods, scooters, my first girlfriend and my favourite band.’

‘I was desperate to become a mod,’ Davina admits. ‘But I was too shy so a boy from my school took me to my first mod night  in Wings in  the Battle of Britain  pub in Northfleet. I couldn’t believe that so many other kids of my age were so into 60s music, like I was, so I was soon hooked – and that’s where it all began. After that, most of my time was spent in second hand shops and Kensington Market perfecting the mod look, and dancing! It took hours to get ready. Getting the make up just right – the eyeliner was the hardest bit  as well as back combing your hair – normally with a bathroom full of giggling mates and a Supremes album on for inspiration!’

Mod Life, soul music, scootering and Carnaby Street filled my youthful heart, took me on an amazing journeys and left a lasting legacy of wonderful memories that still make me smile at the love we all shared, ‘ says Kay Sugg. ‘From the sharp cut of a suit, a neat bob hairstyle, ski pants or mini, we danced our style, to our music and looking cool round town was an every Saturday treat.’

‘That’s Entertainment’ installation
So back to my installation.  Because the phone box was featured on the Sound Affects album, Gravesham Council wanted my installation to be a tribute to The Jam.

I tried to combine all this in my piece.  I started with some initial sketches – two  figures – mods – speaking  lyrics  from Start! one of the tracks on Sound Affects, to go on either side of the telephone box.

And then a eight smaller drawings – my take on some of  Bill and Martyn’s images from the Sound Affects cover.

The  Old Town Hall box has 24 panels, eight on each side, so the next job was to measure them up and draw them to scale. While it was pretty straightforward to cut paper to size for the smaller drawings, I drew out the people full size and then cut them into panels afterwards, discarding the bits of the pictures where the metal window frames would go.

Gravesham Council then took those drawings and transferred them onto white vinyl to stick onto the inside of the box. The plan for the Winter Festival is to light the box from the inside, illuminating the drawings, while the Sound Affects album plays on a loop.

So come on down next weekend and have a look and a listen. I’ll be hanging around the phone box and it will be nice to see everyone there – sharp suits,  Chelsea boots and Parkas optional.

Follow the link below for the full programme but don’t miss  the interactive installation, Light and Thread, in St Georges Arts Centre, created by friends of this blog Filaments Art Collective, who work aboard LV21 was featured last May.

Also, check out Bill Smith’s book which tells the stories behind some of his covers – you’ll recognise pretty much all of them, I reckon.

The Winter Light Festival 2022, will take place at the end of this month, on Saturday 29th January and Sunday 3Oth, between 5 and 8pm.

Light and Thread by Filaments Art Collective
A collection of light installations and digital projections made from textiles, thread and paper.
19th – 30th January 2022
Tuesday – Friday 10am – 5pm
Saturday and Sunday  10am – 4pm

Over the years, Bill has designed album covers and sleeves for artists including Kate Bush, Led Zeppelin, King Crimson, Marillion, Genesis and Mike Oldfield . Check out the link to his book ‘Cover Stories’  which tells the stories behind some of those covers
https://redplanetmusicbooks.com/collections/full-catalogue/products/cover-stories