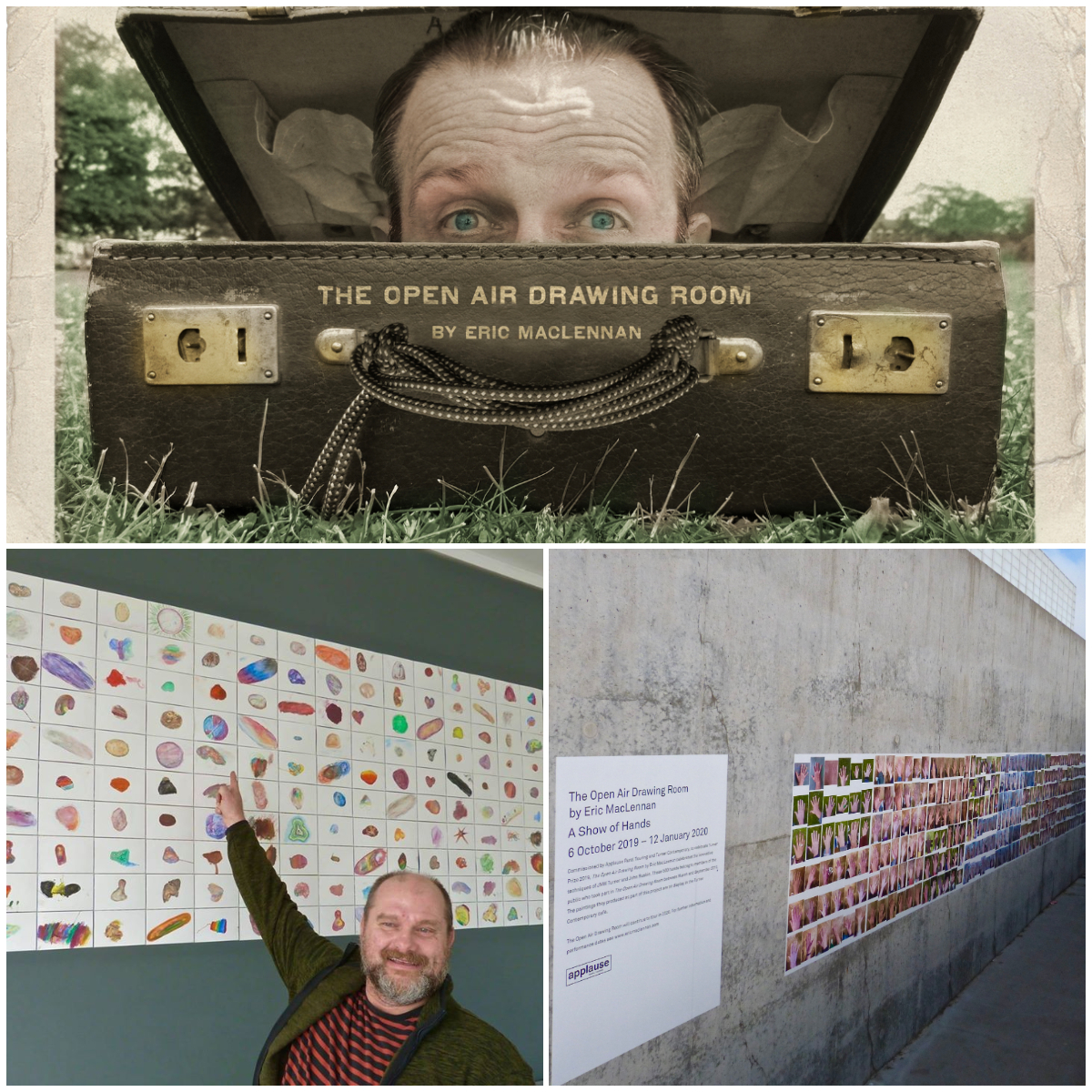 Did I ever tell you that I’m currently exhibiting in the Turner Contemporary in Margate? No, seriously, I am.  Sort of. My watercolour painting of a stone is one among 500 others produced by members of the public as part of Eric MacLennan’s participatory art project The Open Air Drawing Room. https://turnercontemporary.org/whats-on/the-open-air-drawing-room/

I first met Eric in July this year when he brought The Open Air Drawing Room to the Riverside Fringe Festival in Fort Gardens in Gravesend. At the time, I was helping out with another community project where festival goers collaborated to produce a large mural of Gravesend.

I noticed that something very intriguing was going on on the pitch opposite us. At first it looked like a piece of performance art. Two slightly eccentric looking people used a karabina and rope arrangement to draw a perfect circle of sand on the ground. As people stopped to watch, they were invited to stand on the edge of the circle. The performers then handed round small plastic stools, which participants put on their heads. Strange, I thought.

When I looked over again, the group were sitting on their stools, busily drawing something on a small card. Well, I had to find out what was going on, so I popped over, got involved and met Eric.

Eric MacLennan trained in movement in Paris and worked for a while in the theatre, television and film. But over the last ten years he has fulfilled several small commissions that combine performance art with other experiences. ‘I’m interested in things that cross over, that don’t fit neatly into some of the boxes or labels that we use to describe styles of artistic practice,’ he says.

His piece in 2017, called A Voyage Around My Bedroom, which combined philosophy, performance art and one-to-one performance, toured small festivals and fetes. ‘Events that probably couldn’t afford to commission art,’ Eric explains.

Funded by Applause Outdoors  https://applause.org.uk/outdoors/ the production was inspired by the experiences of

Xavier de Maistre who, towards the end of the 18th century, was confined to his house in Turin, following a duel. To keep himself from going mad, he made journeys in his mind, describing ordinary, everyday objects in his bedroom as if they were extraordinary and new. ‘I made this big glass box and put a bed inside it and invited individual members of the public to come into the box with me,’ Eric recalls. ‘I’d ask them about their bedroom, drawing their attention to things they probably go past every day and take for granted. The performance offered a way for people to look at the world differently for a moment, slowing down and enjoying what is there.’ http://www.avoyagearoundmybedroom.com/about/

This year Eric has been touring small events around Kent with another commission from Applause Outdoors and Turner Contemporary.  ‘To celebrate Turner Prize 2019, Turner Contemporary were looking for something that would bring people into the gallery to see the Turner Prize finalists who were being exhibited there,’ Eric explains. ‘I suggested that the best way to get people to visit a gallery is if their work is displayed there. And that was the birth of The Open Air Drawing Room.‘

He calls it ‘socially engaged art’ because the public are not passive viewers but an active and essential part of the experience. The Open Air Drawing Room has several elements. As I described above, each performance starts as a piece of street theatre with passers by watching actors create a sand circle.  But as people join the circle, they are gently drawn into the performance, eventually becoming performers themselves.

Throughout the production are references to the innovative techniques of JMW Turner and John Ruskin, starting with those stool masks. Ruskin is said to have made a card with a hole in it so that he could really look at something closely, without distraction. By wearing the stools as masks, participants have a viewfinder through which they can view the world differently.

After a focus on close observation using the stools and later the thumb grip hole on an artist’s palette, the

production changes very subtly from performance to workshop. The artist-facilitators (Eric and his partner) produce a collection of 31 stones, which Eric has collected from around the UK. Each represents and is named after one of the 31 sea areas around the British Isles…Tyne, Dogger, Fisher etc.

Participants now sit on their stools and after choosing a stone, are asked to draw round it before make their own close observational drawing of that stone inside the outline. ‘They use watercolour pencils, smudging the colours as JWM Turner would have done and they produce a painting,’ Eric observes. ‘People find that very liberating and realise, actually, we can all paint.’

Over the course of the project 501 paintings have been produced. You can see them displayed together as ‘one giant beach’ at Turner Contemporary until 12th January 2020. That’s me pointing at mine in the photo at the top of this piece.

And there is one last touch. To acknowledge JWM Turner’s interest in photography, which was in its infancy when he

was painting, Eric has taken a photograph of the hand that drew each stone. A Show of Hands, featuring life-size images of the hands of artists aged from two to 86, is displayed outside the gallery. The order of the photographs corresponds to the order of the paintings inside the gallery, so visitors can match the hand to the painting if they wish. Eric has been moved by the emotional response that these hands have evoked. ‘’I is really excited to see young children stop to press their hands against the images, as if to say hello,’ he says. ‘It’s another example of people noticing the small detail that we often rush past because of the busy lives we lead.’

Those of you who know me know I’m a big fan of community art projects (Hand of Cards (2015), Christmas Cards this year https://duncangrantartist.com/2019/04/07/only-261-more-days-until-christmas-time-to-think-about-lunch/ and some of the big Small Towns that I’ve done in schools and elsewhere) and I really enjoyed being involved in Eric’s project. It did feel a little odd at first but working with others in that circle means you’re never exposed and the whole experience really made me think….which is good. If you are inspired to take part too, there is still a chance, with six more performances in the Foyle Room of Turner Contemporary on 21st and 22nd December 2019 at 12 noon, 2pm and 4pm.

Eric is now looking for funding and a gallery partner so that he can continue touring The Open Air Drawing Room over the next two years.  He hopes the final artwork will set a new world record for a painting created by the largest number of artists.

If you want to find out more about Eric MacLennan’s work or if you have questions for him, please visit his website https://www.ericmaclennan.com/ 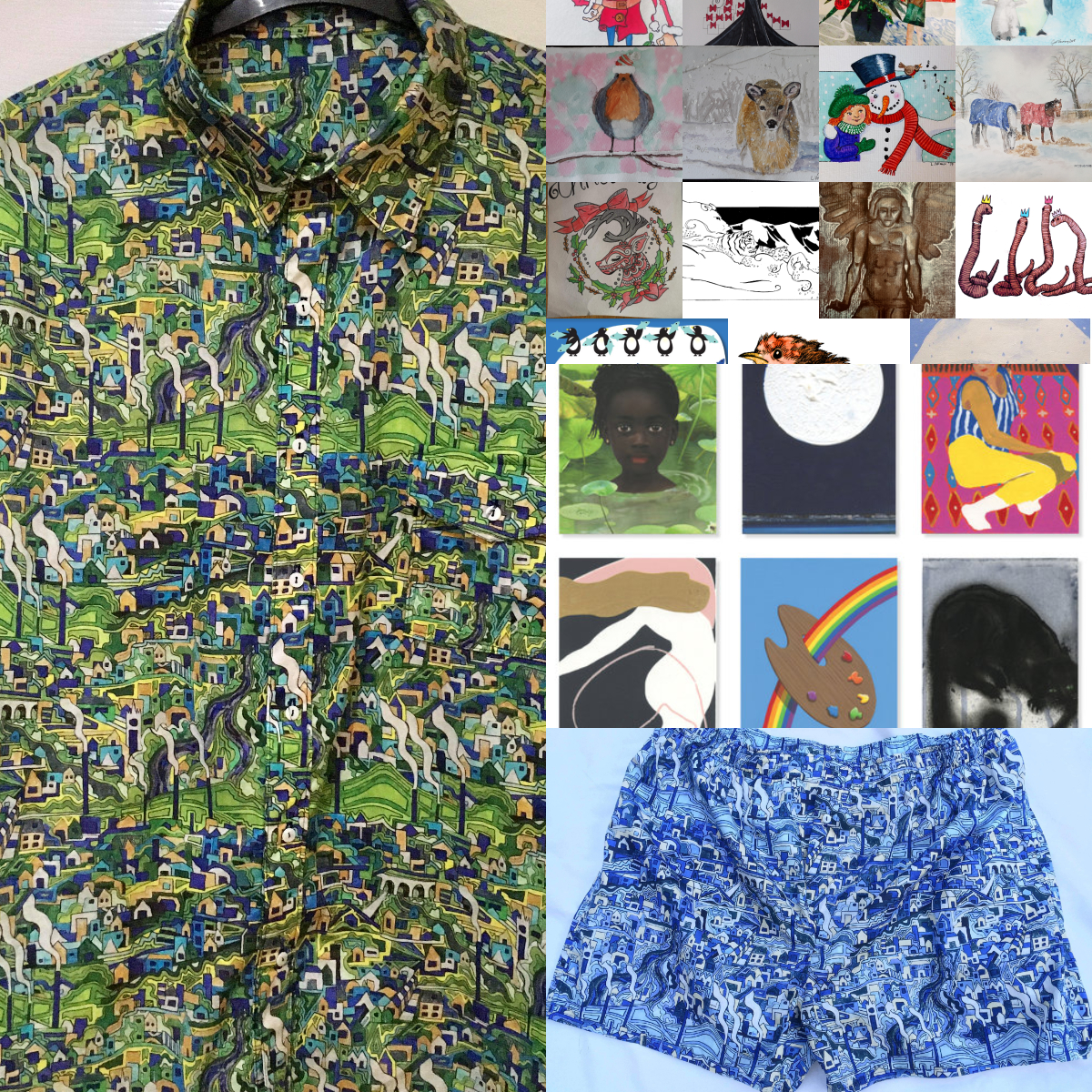 Time for a few more updates

Christmas cards
Christmas is still coming. It’s November, so it is OK to start thinking about it. Are you ready? Have you got your Christmas cards yet? No. Well, I can help you with that.

These boxed sets of 42 beautiful charity Christmas cards and envelopes, each card designed by a different (mostly local) artist, have been on sale for a while now. They are raising money for Christmas dinner, this year, at No. 84 Tearoom and Eatery at Echo Square in Gravesend https://www.no84.co.uk/ Cafe owners Adrian and Andrea offer a free Christmas dinner to people in the local community who would otherwise be alone on Christmas Day.

I’m delighted to say that over half of the boxes I got printed have been sold now. In fact, I’ve only got 38 boxes left so don’t miss out.  Boxes are available on this website https://duncangrantartist.com/product-category/charity-christmas-cards/ and in various venues around Gravesend, including https://www.no84.co.uk/ or you can get them from me directly, if you know where to find me.

Each box costs £20 (£24 including postage and packing if you order them from the website) with all profits going to help those less fortunate than ourselves this Christmas. You can find out more about the 2019 Christmas card project here https://duncangrantartist.com/2019/04/07/only-261-more-days-until-christmas-time-to-think-about-lunch/ Apologies to anyone from overseas who tried to order online but found that they needed to take out a bank loan to pay the postage. That has now been put right. Postage to Europe is £10, elsewhere in the world £15.

Art on a postcard

Once again I was honoured to be invited to donate 4 postcard-sized artworks to the 6th Art on a Postcard charity auction to raise money for the Hepatitis C Trust. If you are interested, you can find out more about the charity in my blog from June this year https://duncangrantartist.com/2019/06/26/art-on-a-postcard-urban-contemporary-vs-street-photography/

As well as me, this year’s line up includes anonymous contributions from famous names from the artworld such as Norman Ackroyd RA, Jock McFadyen RA, Carolina Caycedo, Vanessa Jackson RA, Dan Baldwin, Louise Lawler, Florine Démosthène, Joan Snyder, Timothy Hyman RA,  Jeremy Deller, Miya Ando, and Helen Beard. All cards start at £50 so if you think that you can spot a famous artist just from looking at their work, you could snap up a real bargain.  I was really pleased to see that all mine have now had bids so I won’t be consigned to the box of shame and will be raising some money for this good cause. Off to the private view on Tuesday. The auction is online https://paddle8.com/auction/hep-c-trust and runs until 14th November, so there’s still time.

Podcast
Last Wednesday, I met Nathalie Banaigs – Founder and Director of Kent Creative http://kentcreativearts.co.uk/ to record a podcast along with author, Frances Beaumont https://francesbeaumont.co.uk/.  If you haven’t had enough of me already, you can listen in here https://soundcloud.com/user-365282206/2019-11-05-artist-duncan-grant-and-author-frances-beaumont You may need to install Soundcloud to listen. There you’ll find all kinds of interesting chats with local creatives from all branches of the Arts – well worth a browse.

In September, Faversham seamstress Jane Potter https://www.facebook.com/jane.a.potter.textiles posted this on Facebook. Those of you who have been following me this year will recognise the fabric as one of the colourways of a design taken from my 2018 winning #LibertyOpenCall entry. https://www.libertylondon.com/uk/duncan-grant-tana-lawn-cotton-000620140.html?listsrc=Search%20Recommendation If  you don’t know what I’m talking about this blog from explains all. https://duncangrantartist.com/2019/01/30/liberty-open-call/

As part of my prize, I received five metres of green Tana Lawn Duncan Grant from Liberty – was going to post a link but looks like it has sold out – and Jane made this from it for me. Thank you, Jane.

I am going to pursue the fabric design thing. This week, I attended my first ever art-based since school, at the Fashion and Textile Museum, up in that there London, trying to get some Photoshop skills for my design stuff.  https://www.ftmlondon.org/ftm_courses/photoshop-for-textile-designers-3/ Had to walk through the Zandra Rhodes 50 Years of Fabulous exhibition to get to my class., which was kind of ironic because it is one year since I met her in person at the Liberty fabric launch. It was a small group – just four of us – and I’ve learnt a lot, like changing colourways, cropping images, collaging bits of designs and making repeats. Also managed to reset my phone to factory settings and nearly lost my wallet. But more on all that another time maybe

When I entered the #LibertyOpenCall my mate Richard Marshall said, ‘If you win, I want a pair of pants made out of that’.  Well, Jane can also make boxers, Richard – and here they are! Now just your part of the bargain to fulfil – looking forward to the photoshoot. watch this space, readers.